Josh and I returned from Africa last week. I started a ride report on advrider.com – click here – which I’ll be updating over the next few weeks. It’s trippy to go from riding a motorcycle in Africa one day, to my normal home routine the next. Already evaluating destinations for next winter’s trip.

Andrew and I laid out the two Reckless 80’s from Africa and inspected them for issues. We put these two prototypes through a lot of abuse on this trip and they held up great. There was one minor issue on a drybag (known issue, fixed in the new version), and a few other things on the harness that we can address in production. 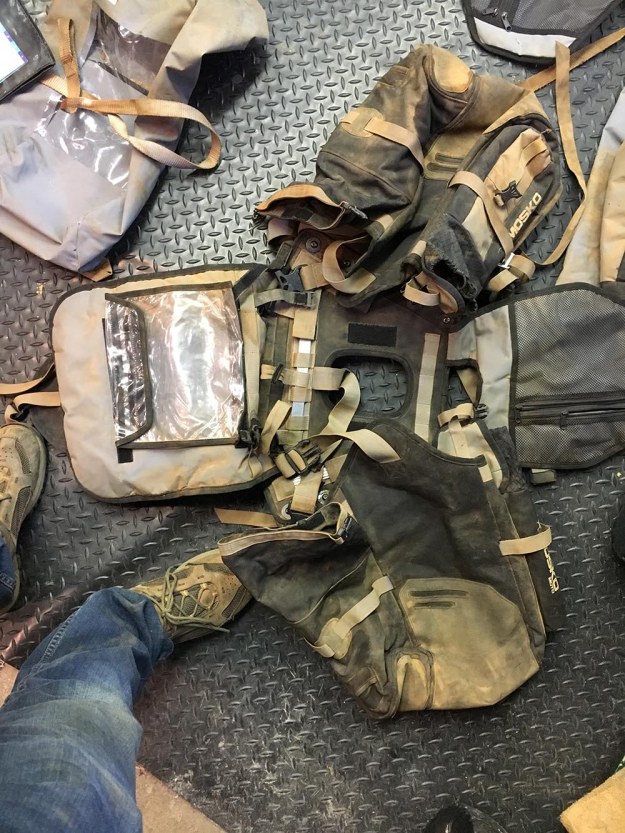 You can see where the heat shield was pushing against the bag on the left side of the pic. There’s always going to be some hot spots on the underside of these bags. Even if abrasion eventually works its way through the outer fabric, it will rarely if ever get through the internal polyethylene sheet. Still, never a bad idea to inspect the bottom of the bag after the first ride and address any potential abrasion issues sooner rather than later.

Of the 10 bolts connecting the new three piece design, one was a little lose when I returned, and the remainder were all as tight as when I left. We’ll recommend using loctite on these.

There was one spot where a leg bag seam showed signs of possibly separating from the harness in the future. We already made some changes to address that, including adding webbing to support the leg bags and disconnecting them from the beavertail. To further prevent this from happening, in production we’ll be wrapping the fabric all the way around the edge of the bag, so it’s double-sewn for a really solid connection.

With the narrow profile of the 200 cc bikes we were on, the metal bar on the harness bent & contoured to the bike, which is what we want it to do, but in this case, after bending, it became too short for the webbing sleeve that holds it. We’ll make that bar a little longer in production. Also, the aluminum bar we’re using in production doesn’t have the same sharp edges as the steel bar in this prototype, so the wear in the pic below won’t happen in the production version. 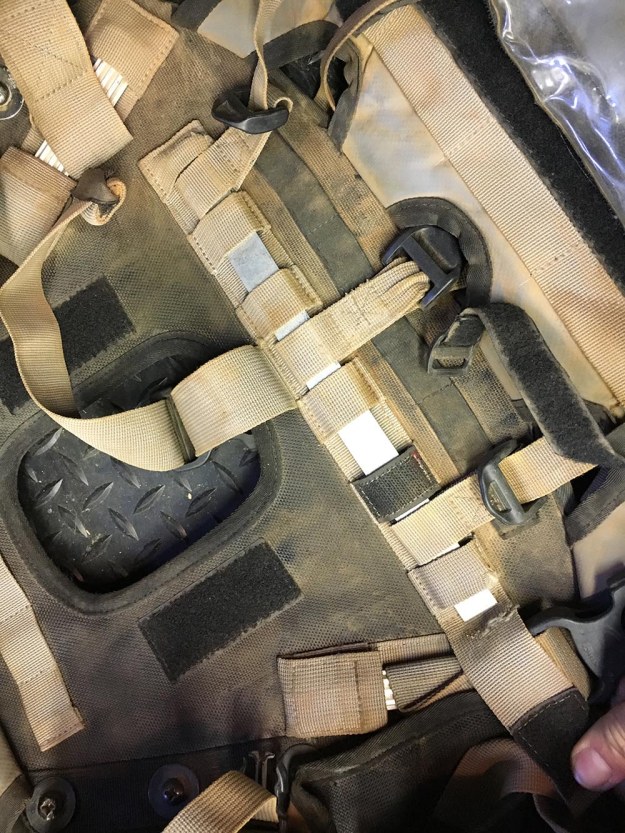 For our tank bag connection, we’re going away from the separate harness/bag approach we’d been playing with before, and leaning instead toward a system where the straps are permanently connected to the bag. We’re experimenting with a side release buckle connected to the bike’s frame with heavy duty zip ties. We mocked up the prototype below.

Up front we’ll do some kind of simple collar that connects around the bike’s yoke, and has two side release buckles that connect to the bag. On the bag I used in Africa this year and Asia last year, it was annoying to reach down and connect a strap all the way around the yoke every time I want to connect/disconnect the bag. The collar addresses that issue.

The extremely rough prototypes in these pics are just to dial in the size, dimensions, and general layout of the bag. These then get combined with computer specs, and sent to the factory for ‘real’ prototypes to be made. This particular one is ready to go.

The second tank bag we’re working on is this funky kayak-hatch concept. The idea is to make a waterproof bag without a roll-top or dry-suit zipper. 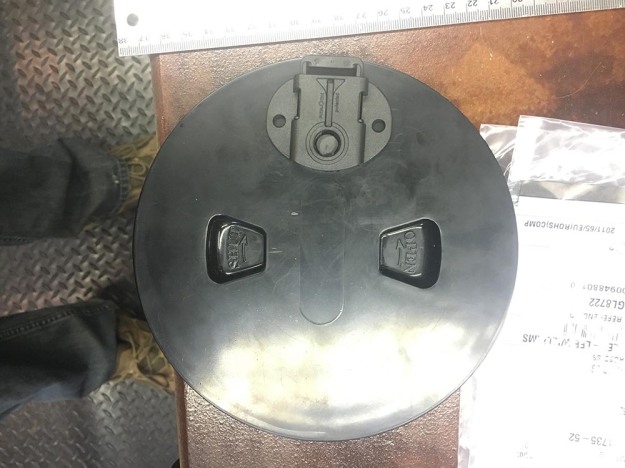 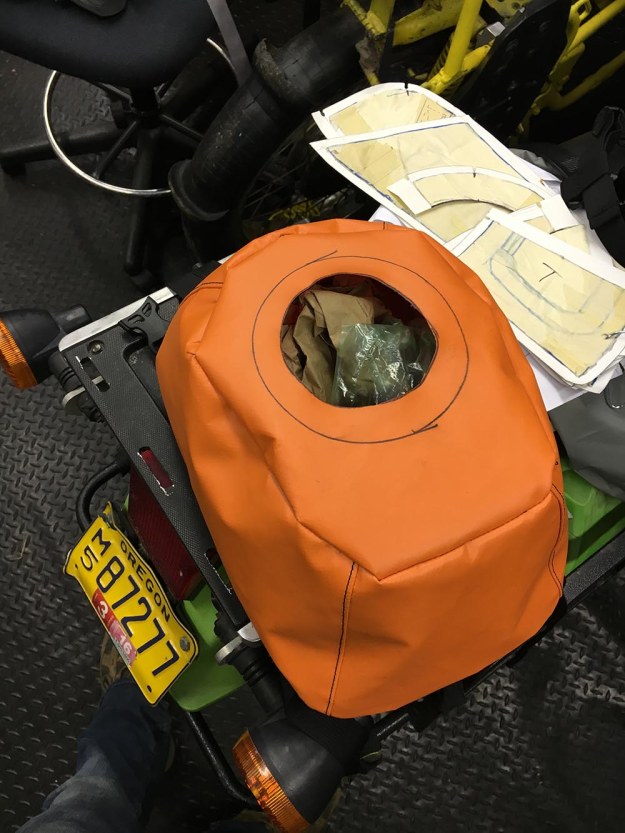 We like the idea of an external headlamp pocket, where you can click your headlamp from outside the pocket to illuminate the inside of the bag through a clear vinyl panel. As an added benefit, you’d always know exactly where your headlamp is, because hunting for a headlamp in the dark sucks.

For both tank bags, we’re playing with a two-sided map pocket/MOLLE panel, which can be flipped, depending on how you want to use it.

We have two other new bag concepts underway. The first is a ‘Reckless 15,’ which is a smaller reckless bag designed to carry extra fuel, tools, and tubes on the back of a dirt bike. All the small bags would be welded-seam roll tops, no sewing or zippers, so they’d be fully waterproof. The two side bags would be permanently attached to the harness, while the rear center bag would be removable. The straps connecting the rear center bag would line up with the webbing loops on the new Tracker 10/20 drybags, so the system can be expanded if needed. 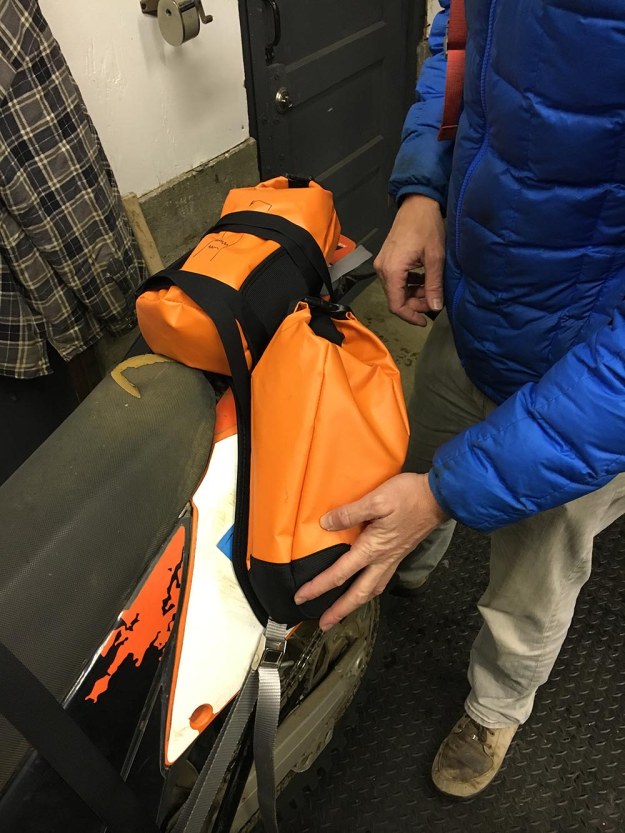 The second new concept is a simple bolt-on holster that holds a removable drybag. This would be a simple, economical, weight-conscious side bag solution for people with hard pannier racks and tight budgets. The holster would stay permanently attached to the rack, and the drybags would slide in/out. 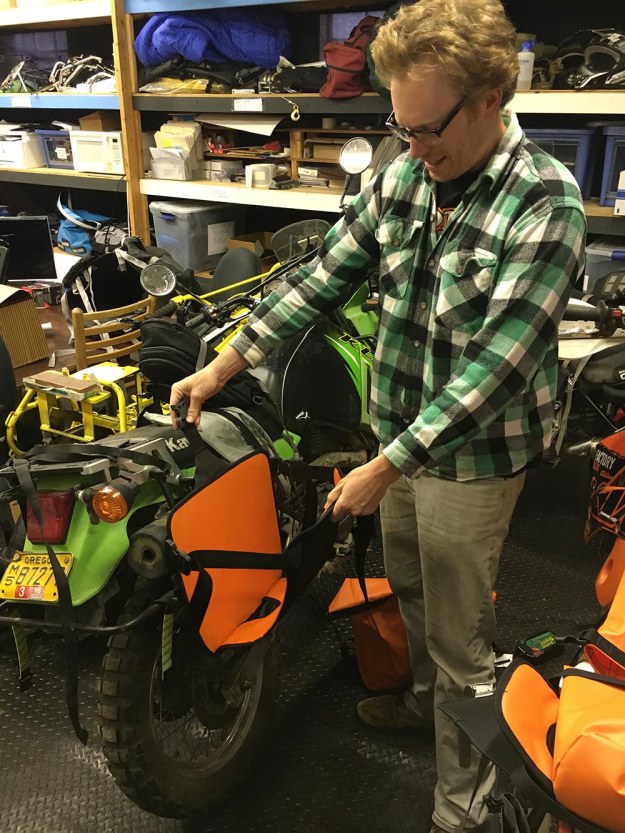 Lots of new stuff in the works!

Here’s a couple more pics from the last segment of our trip in West Africa. 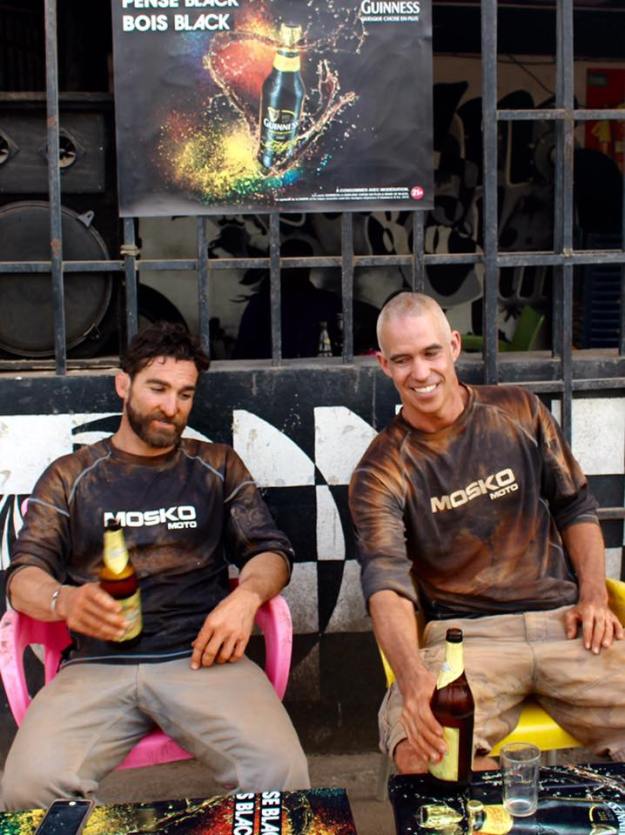 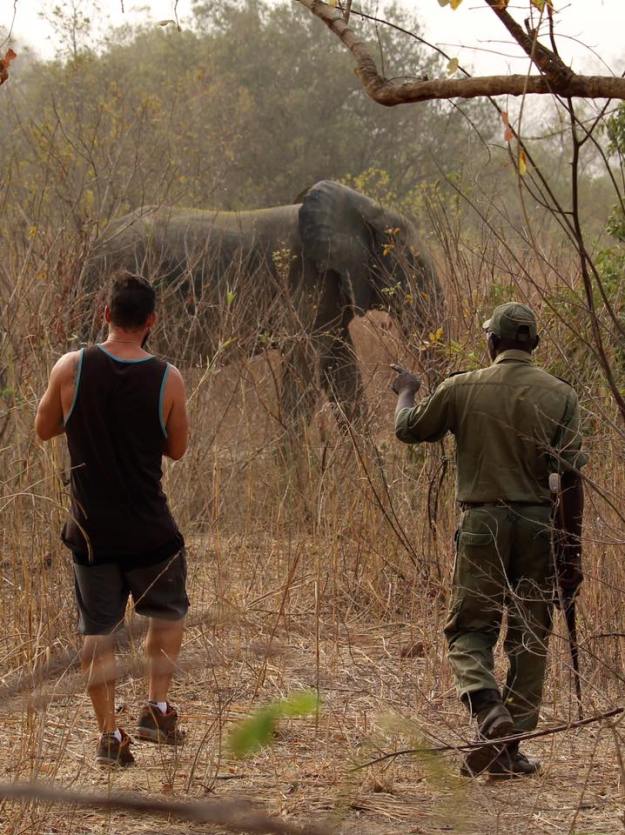 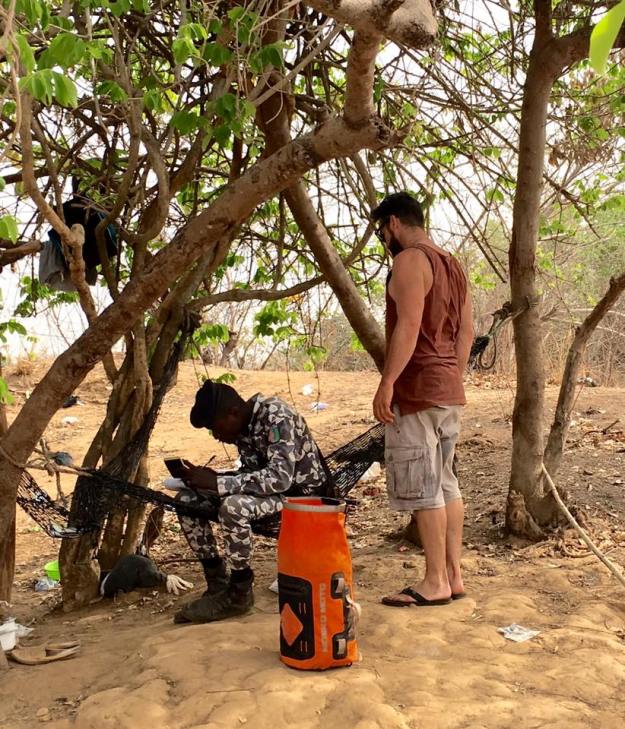 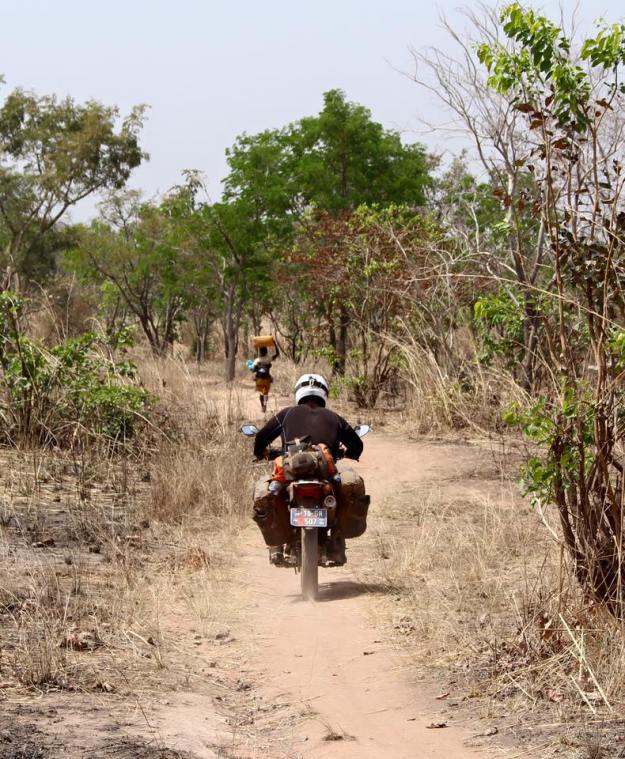 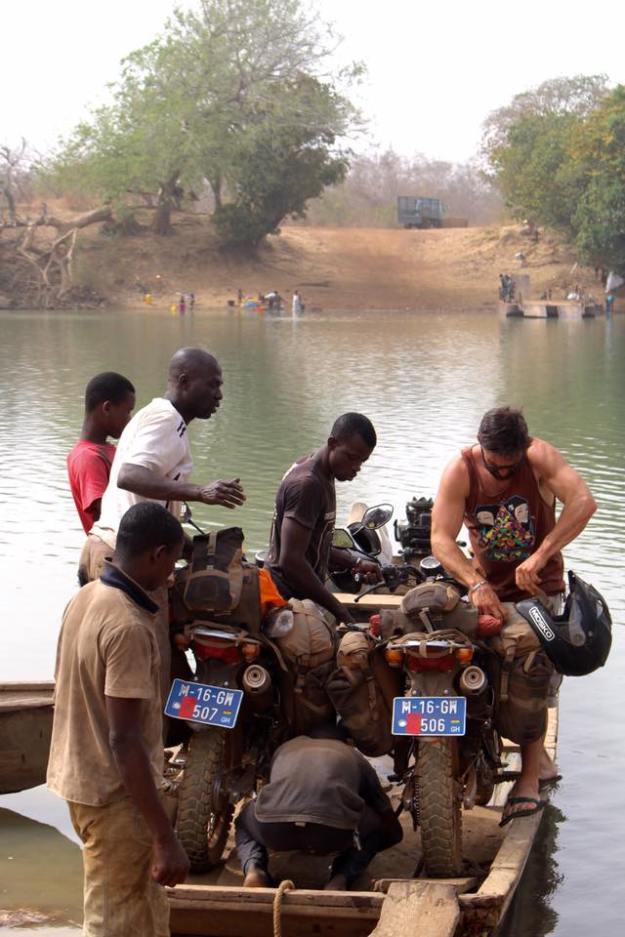 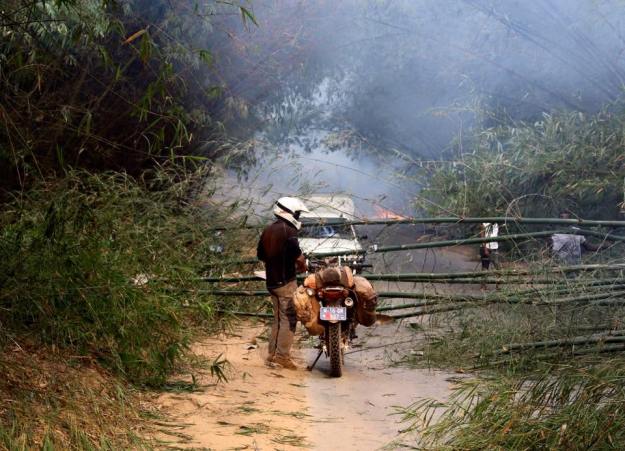 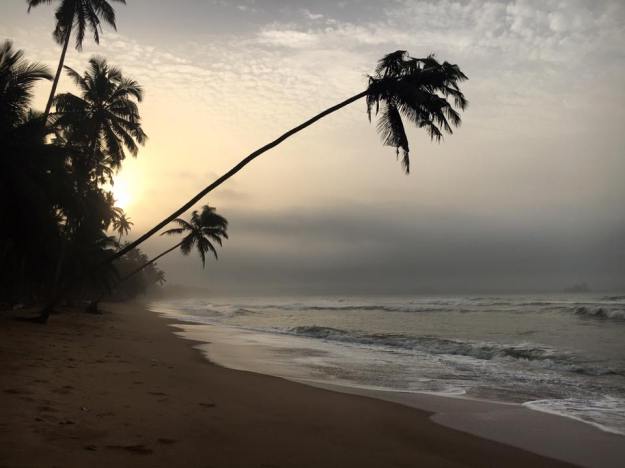